Calculating the PageRank of nodes in a directed graph.

##Description A PHP implementation of the PageRank algorithm described in The PageRank Citation Ranking: Bringing Order to the Web (PDF). The project was created to support my session "PageRank und TrustRank" at the AFS - Akademie für Fortbildung in SEO and gives some basic examples as well as something to get interested participants started quickly.

The PageRank itself is an indicator of the importance of a node in a linked graph. The basic idea behind the algorithm is as follows:

In this implementation an iterative approach is used to calculate the PageRank (PR) (source: Wikipedia):

where p_1, p_2, ..., p_N are the pages under consideration, d is a damping factor to avoid "rank sinks", M(p_i) is the set of pages that link to p_i, L(p_j) is the number of outbound links on page p_j, and N is the total number of pages. The PR values change on every iteration step until a predefined threshold for the difference between old and new PR value is reached.

The Graph in the example corresponds to the following graphic, taken from the Wikipedia article on PageRank: 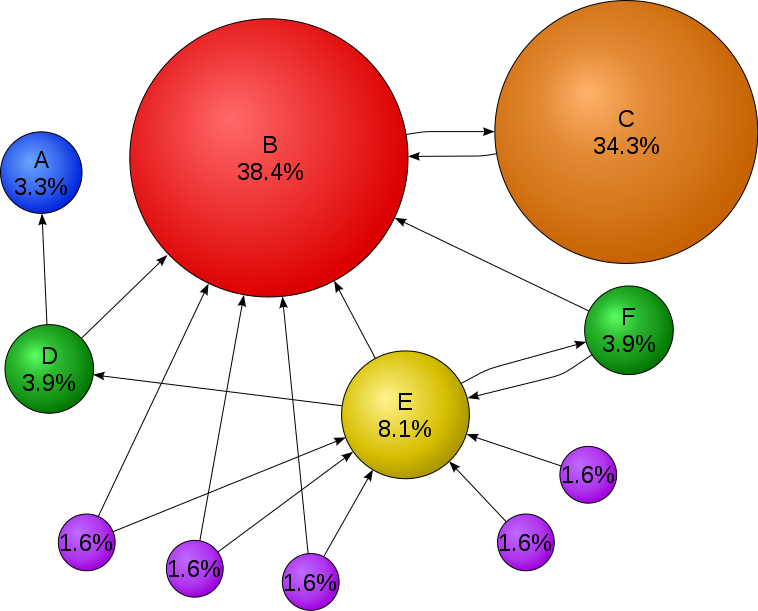 The recommended way to install pagerank is through Composer.

Next, update your project's composer.json file to include pagerank:

Caution: You need to explicitly set "secure-http": false in order to access http://packages.myseosolution.de/ as repository. This change is required because composer changed the default setting for secure-http to true at the end of february 2016.

After installing, you need to require Composer's autoloader:

Firstly, we need to define a set of connected Nodes that form a Graph. Usually, that data will be obtained from a web crawl that saves the outgoing links of each crawled web page e.g. as CSV file. But for now let's assume we're building the Graph manually from scratch:

In this scenario, Node $a links to Node $b. Next, we need an instance of the PageRank class to perform the PageRank calculation on the Graph object:

The different customization options will be explained subsequently.

PageRank::calculatePagerank() returns an object of type PageRankResult that holds a reference to the original Graph object as well as an array of PageRankNodes. A PageRankNode has a reference to the original Node object as well as a value for it's current PageRank and it's PageRank in the former round of calculation. Why is that?

This implementation calculates the PageRank iteratively. In each iteration, the PageRank values will vary - heavily in the beginning, less and less towards the end. This becomes clear once you realize that the PageRank of page B depends on the PageRank of page A (assuming page A links to page B) but the PageRank of page A itself relies on other pages linking to A. In fact it's not uncommon that one of those pages linking to A will be linked to from page B - creating a nice little circular interdepency between those pages. To solve this problem, we'll fixate the current PageRank of each node during an interation step and use those fixated values as base for the calculation. Once we finished the calculation for all nodes, we can set those "new" values as the current PageRank and start the next iteration. The difference between "old" and "new" PageRank will decrease over time (i.e. number of iterations steps) and the calculation terminates once a certain threshold is reached. So basically:

##Customization options There is a number of options to calibrate the PageRank calculation.

###Damping factor The damping factor is a value between 0 and 1 and is used to avoid the accumulation of PageRank in so called "rank sinks". Such a rank sink emerges when two nodes link to each other in a circular manner. In the original paper, a value of 0.85 is proposed.

###Limit runtime Usually the PageRank calculation terminates as soon as the difference between old and new PageRank values of two subsequent iterations exceeds a certain threshold. But you can also choose to let the calculation run for a fixed number of iterations. Whatever limit is reached first terminates the calculation.

###Collapse links To my current knowledge there is no clear statement on how to handle multiple identical links (e.g. web page A has three outgoing links to web page B). Since usually the term set is used when talking about the incoming links, I tend to think that mutiple identical links should be considered as only one link. But one might also argue (from a web perspektive) that multiple links to the same page increase the likelyhood of at least one of those links to get followed.

##Keeping historic calculation data As mentioned in the introduction, this project was created with an educational purpose in mind: Give the audience a better understanding of the concept of PageRank and the way it is calculated iteratively. So it was important to me to visualize the changing PageRank values after each iteration. To capture those temporary results, the PageRank::calculatePagerank() method takes the second argument $keepAllRoundData. If $keepAllRoundData is true (default is false), the PageRankResult will have an array of PageRankHistory objects (one for each round; otherwise only the final round is stored).

##Import link data from CSV It is cumbersome to define a graph manually. Using a CSV format (one column contains the originating node, another one the target node) feels more natural. There are two importers ready to go: CsvImporter - a generic importer for CSV files and SEOSpider - a subclass of CsvImporter that is adjusted to the output format of the desktop based crawling software Teknosys SEO Tool.